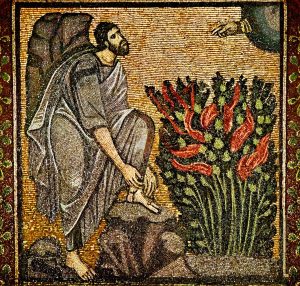 Today, the Church honors the memory of the Holy Great Prophet Moses, called the God-Seer and lawgiver, and born into the tribe of Levi. Scholars say he flourished 14th–13th century BCE. As we know, under Moses’ leadership the Hebrew people were lead to their freedom from the Egyptian oppressors in what is called the Exodus, meeting with God (see the image with this post) AND received the revelation from God that became the Pentateuch (the first five books of the Bible).

Moses is also listed in the Roman Martyrology. The entry for Moses reads: