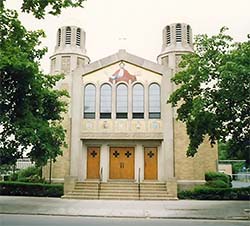 Some General Characteristics of the Ukrainian Greek-Catholic Church

What is the Church? Every Catholic believes and teaches that our Lord and Savior Jesus Christ founded the Church and sustains the Church –a community of faith, hope and love. The gathering of the Christian faithful is the community of faith which we call His Church. Without debate based on Divine Revelation and sacred Tradition, the Church that Jesus Christ founded is, in fact, the Catholic Church. As church, we are a body of believers on the road to Salvation in Christ; the Church is both divine and human; and as such, the arthly structure is formal and continues until today and continues under His authority and protection.

The Lord called the 12 Apostles and he appointed Simon Peter to be the visible head of the Church. Jesus said to Peter, “You are Rock and on this rock I will build my Church” (Matthew 16: 18). What Jesus meant when He used the word “build” means to create a structure to be of service to man and woman for their sanctification. through St Peter and the other 11 Apostles and disciples Jesus built His structure on earth. Several other points to make.

The Catholic Church is the only church that makes the truthful and real claim to have been personally founded by the Eternal Word of God, the Second Person of the Blessed Trinity, Jesus Christ. Every other faith community was founded by man traces such as Martin Luther or John Wesley. The Catholic Church trace her lineage back to the Son of God who appointed St. Peter as the first pope. This line of popes has continued unbroken for almost 2,000 years.

Historically we know and recognize that the Diocese of Rome is central to the Catholic Church, but this does not mean that the “Roman rite,” equals THE with the universal Church. To believe that the Catholic equals that which is exclusively done in Rome neglect the fact that there is the Byzantine, Chaldean, Maronite or other Eastern Churches which are all very much make the Catholic Church today. 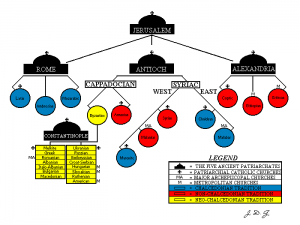 Recently, the Ukrainian Catholic Synod of Synod Bishops stated, “The inculturation of the Gospel bore fruit in the formation of various Christian traditions: Byzantine, Latin, Coptic, Syrian, Armenian, and others. In this way the Gospel of Jesus Christ took flesh in the multitude of cultures of Christian peoples; the one Tradition of the Word of God was expressed in a diversity of traditions” (Christ Our Pascha, 61-62).

We worship God in Trinity, glorifying equally the Father, Son, and Holy Spirit. We believe that the Lord Jesus Christ is Son of God, begotten of the Father before all ages; that He is truly God, of one essence with the Father and the Holy Spirit. We believe that Christ Incarnate is also truly man, like us in all respects except sin. We worship the Holy Spirit as Lord and Giver of Life Who proceeds from the Father. We honor the Saints as those who have matured “unto the measure of the stature of the fullness of Christ”(Ephesians 4:13). We ask their intercession before God knowing that they live in Jesus Christ and that nothing, not even death, breaks the bond of love we share with them in Christ. Of the saints, the Ever-Virgin Mary, the Theotokos (Greek: Mother of God), holds a special place as “more honorable than the Cherubim and more glorious beyond compare than the Seraphim” (cf. Luke 1:48).

The sacraments in the Byzantine Church are officially called the “holy mysteries.” The very ancient and traditional practice of the Byzantine Church is to consider all things which is in and of the Church as sacramental or mystical. In her wisdom the Church identifies seven sacraments (mysteries): baptism, chrismation (or confirmation), holy eucharist, penance, matrimony, holy orders and the anointing of the sick. Each draw us more deeply into the life of the Church as given to us by the Lord.

The Church as community of the faithful, is frequently defined as being new life in Jesus Christ. Orthodox theologian Father Alexander Schmemann taught,

This is why we say that man and woman’s life is lived in and by the Holy Spirit, hence we say in communion with God. And this communion is made possible by the faithful reception of the holy mysteries (sacraments). All aspects of one’s new life of the Church participate in the mystery of salvation. In Jesus Christ and the Holy Spirit everything which is sinful and dead becomes holy and alive (re-generated, re-newed) by the power of God the Father. Therefore, we believe that in Jesus Christ and the Holy Spirit everything in the Church becomes a sacrament, an element of the mystery of the Kingdom of God as it is already being experienced in the life of this world.

The Spiritual Life – our Life of Prayer

The shortest, simplest, and most powerful prayer is the prayerful use of the most holy name of Jesus. The Church Fathers have spoken of this prayer as the the “Jesus Prayer.” The Jesus Prayer is simply saying “Lord Jesus Christ, have mercy on me, a sinner” or even more simply speaking the single word “Jesus” (or “Lord Jesus”). We pray the Holy Name of Jesus all day, in any circumstance, at any time and place, either aloud or silently.

“The invocation of the holy name of Jesus is the simplest way of praying always…. This prayer is possible ‘at all times’ because it is not one occupation among others but the only occupation: that of loving God, which animates and transfigures every action in Christ Jesus” (CCC 2668).

In Gospel of St. John there is this summary: “These [things] are written that you may believe that Jesus is the Christ, the Son of God, and that believing you may have life in his name” (20:31). In the Acts of the Apostles (3:1-10) we see revealed that Peter and John heal a man lame from birth by using the Holy Name of Jesus: “In the name of Jesus Christ, walk.” There are many other biblical warrants for the use of the Holy Name. This is why we believe that “The name of Jesus Christ” is not only the key to power of prayer but the key which opens the door to our salvation.

Hence, by no other name, no other prayer are we healed, saved and brought into full communion with the Blessed Trinity. Say with faith: “Lord Jesus Christ, have mercy on me, a sinner”

Church history and the lives of the saints reveal the miracles related to the prayerful use of the name of Jesus. healing have been done “in his name.” Physical and spiritual healings, and exorcisms are performed “in his name”. We know from Divine Revelation and from personal experience that the name of Jesus is so powerful that it can throws the devil out of a soul!

St. John Cassian recommends the Jesus Prayer for all his monks because he believed it to be the best when he called it the “arrow” prayer: short and to the point. How can some go wrong in saying with conviction: “Lord Jesus Christ, have mercy on me, a sinner“? The Jesus Prayer was taught by the 6th century monk and teacher of the faith Diadochos who showed that the quiet repetition of the Jesus Prayer leads to inner healing and stillness. “To pray ‘Jesus’ is to invoke him and to call him within us. His name is the only one that contains the presence it signifies” (CCC 2666).

“The principal thing is to stand before God with the mind in the heart, and to go on standing before Him unceasingly day and night, until the end of life” (Bishop Theophan, quoted by Kallistos Ware in The Power of the Name: The Jesus Prayer in Orthodox Spirituality).

The name of Jesus is our salvation.

Our Life in Community

Our Life in Service to the Church and to Society

One of the resolutions of the 2016 Synod of Bishops of Ukrainian Greek Catholic Church (UGCC) which met September 04-11, 2016, in Lviv-Brukhovychi, is the following:

In order to evoke an interest to the social ministering among faithful of UGCC and behave a virtue of sacrifice and mercy, to announce in UGCC:

His Beatitude, Patriarch Sviatoslav is encouraging us to look at the ways we can implement these items in our life of faith on a personal level and in our parish.