This Knights of Columbus council (16253) honors the great and holy leader of the Ukrainian Catholic Church, Metropolitan Andrey Sheptytsky, OSBM.

The Council meetings are the first Mondays at 7:00 p.m.

The Blessed Metropolitan Andrey Sheptytsky Ukrainian Council is active in this parish under the leadership of:

The Knights of Columbus, founded in the basement of St. Mary’s Church here in New Haven in 1882 by the Venerable Servant of God Father Michael Joseph McGivney (August 12, 1852 – August 14, 1890), a priest of the Latin Diocese of Hartford, and served as a curate at St. Mary’s. The virtue of charity has been the first principle and mission of the Knights of Columbus that McGivney emphasized and is lived today. Each member of the KofC knows, lives, demonstrates and honors the four principles of the Order: Charity, Unity, Fraternity and Patriotism.

“We are answering Pope Francis’ call to go to the peripheries,” Supreme Knight Carl Anderson said. “We can reach half way around the globe to help those in need and we can reach to our neighbor next door. And we do that every day. That makes us witnesses to the faith. The word that sums up a man’s membership in the Knights of Columbus is diakonia: service to God, service to one’s country, service to one’s family and friends, service to one’s neighbor, in particular, service to the most vulnerable. To that end Knights have given 76+ million hours of service to men and women around the world. “We are men of faith and men of action.” Keep up to date with KofC news here.

Patriarch Sviatoslav said at the 2018 Supreme Convention, “The Knights of Columbus in the twenty-first century are called to continue to be the Knights of Charity, as was the vision of venerable Fr. Michael McGivney. But they were also called to be the Knights who watch over and defend the truth. Our world, often called a “post-truth” world, desperately needs our active involvement in the defense of truth. The mission of a Knight today is to be “the light of the world” following the footsteps of our Savior Jesus Christ who said: ‘Then you will know the truth, and the truth will set you free’ (John 8:32).”

We welcome Catholic men to live their faith in relationship to the parish and society. Meetings are generally held on the first Monday of each month but please consult the bulletin. 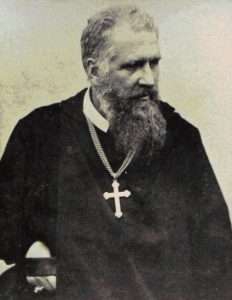 In history, Andrey Sheptytsky (July 29, 1865 – November 1, 1944) was born Count Roman Alexander Maria Sheptytsky in the Ukrainian village of Prylbychi. He was the son of an Ukrainian Aristocrat, Jan Sheptytsky and Sophia Fredro, whose genealogy included notable bishops and Metropolitans of the Greek-Catholic Church of Kyiv. His father objected to son’s vocation to the monastic life but the young Count entered the Ukrainian monastery of the Order of Saint Basil the Great (OSBM) in 1891 taking the monastic name Andrey; he was ordained priest in 1892.  In 1900, he was elected Bishop of Stanyslaviv and shortly afterwards, at the age of 36, elected the Metropolitan, that is, the ranking hierarch of the Ukrainian Greek-Catholic Church. He remained in the service of the Church until his death on 1 November 1944. Sheptytsky’s sainthood cause was opened in 1958.

Father Peter Galadza, a priest of the Canadian Ukrainian Catholic Church and historian stated that Metropolitan Andrey was known for many things, in addition to his reputation for personal holiness, he “worked tirelessly throughout his lifetime for reconciliation between Ukrainians, Russians and Poles, as well as other nations and groups. Particularly legendary were his efforts to see Catholics and Orthodox overcome their historical estrangement. Sheptytsky was a precursor of the ecumenical movement long before the Catholic Church officially endorsed the movement.” Moreover, Sheptytsky “used his resources to create a free clinic, provide countless scholarships and help victims of famine, flooding and war. He personally lived a life of poverty.”

Yale University Church historian Jaroslav Pelikan stated, “Arguably, Metropolitan Andrey Sheptytsky was the most influential figure… in the entire history of the Ukrainian Church in the twentieth century.” 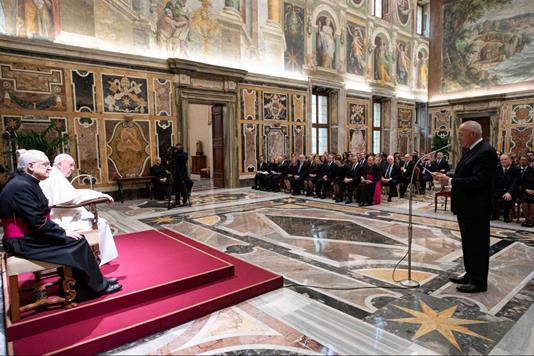 Pope Francis met with Supreme Knight Carl A. Anderson and the KofC Board on February 10, 2020 who made a pilgrimage to Rome to celebrate the 100th anniversary of the Order’s establishment in the Eternal City. The KofC came to Rome at the invitation of Pope Benedict XV.

“Today the Knights of Columbus continue their work of evangelical charity and fraternity in a variety of fields. I think in particular of your faithful witness to the sacredness and dignity of human life, evident at both the local and national levels. This conviction has also led the Knights of Columbus to aid, both materially and spiritually, those Christian communities in the Middle East that are suffering the effects of violence, war and poverty. I thank all the members of your Order for seeing in our persecuted and displaced brothers and sisters of that region neighbours for whom you are a sign of God’s infinite love.

“Since its foundation, the Knights of Columbus has demonstrated its unswerving devotion to the Successor of Peter. The establishment of the Vicarius Christi Fund is a testimony to this devotion, as well as to the desire of the Knights to share in the Pope’s solicitude for all the Churches and in his universal mission of charity. In our world, marked by divisions and inequalities, the generous commitment of your Order to serve all in need offers, especially to young people, an important inspiration to overcome a globalization of indifference and build together a more just and inclusive society.